Skip to main content
It looks like you're using Internet Explorer 11 or older. This website works best with modern browsers such as the latest versions of Chrome, Firefox, Safari, and Edge. If you continue with this browser, you may see unexpected results.

Though known for his literary works, William Faulkner worked as a Hollywood screenwriter throughout the 1930s and 1940s. The materials below detail his work as a screenwriter as well as the cinematic and theatrical adaptations of Faulkner's literary works.

Bouchard Collection: consists of posters, lobby cards, press books, and other memorabilia of movies related to Mississippi created from 1937-2000, including Faulkner cinematic works.

Faulkner - Bacher Collection: correspondence between William Faulkner and William Bacher concerning turning their "modern Christ story", which Faulkner developed as A Fable, into a screenplay. Collection also includes the contract between Bacher and Jill Faulkner Summers for the movie rights. Of particular note in this collection is discussion of Faulkner's views of his ability as a screenwriter.

Evans B. Harrington Collection: University of Mississippi English Professor and Director of the Faulkner and Yoknapatawpha Conference, Harrington studied and published on Faulkner. This collection contains both his work and that of other scholars. Correspondence in this collection references Faulkner film & documentary, conferences, literature and studies.

Newspapers (Boxed).  Box 28 contains 1949 issue of Oxford Eagle special edition on world premiere of "Intruder in the Dust."  Box 57 includes October-November 1968 issues of The Conservative newspaper of Carrollton, Mississippi with articles covering the on-location filming of "The Reivers) (75 boxes).

Open Monday through Friday 9am - 4pm (except holidays) 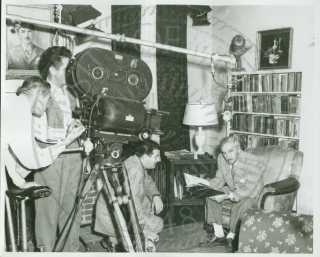